I love creating images using Poser and Vue. Poser is great to create a model based on existing models that’s imported in Vue. And Vue will add the additional landscape, larger objects, plants, water, cloud and lights. The final result can sometimes be very stunning. Unfortunately, there are always some small problems in each item because of flaws while posing the model in Poser. Or because the landscape in Vue overlaps the Poser model.

One flaw tends to be the eyes on models. Each model has two eyes and you need them to look in the same direction. And you’d prefer them to look in a specific direction. So, what’s my trick for this? How to get a model to point her eyes e.g. upwards, because she’s under water, on a huge hook and surrounded by fish? Or have three girls in the grass looking at the same point?

Well, it’s not too complex. I just add a simple primitive, often a ball, to my models. Just one. I also make it invisible so it won’t appear in the rendered result. Once done, I select the left eye of the model and using the “Objects/Point at” menu, I point the eye at the ball. I repeat this for the right eye and the eyes of the other models so all eyes are pointing in the same direction.

Next, I have to move the ball in the direction that I want all models to look at. This means moving it over the X- and Z-axis, preferably far away from the models, else they will become a bit cross-eyed. Then, move it up and down to point them upwards or downwards, and don’t be afraid to put it at -100 on the Y-axis to make them look a bit down.

When dealing with multiple models, like in my image below (which has nudity, thus it’s not suitable for work environments), you might have to do more adjustments. Often, this means that you have to twist and bend the necks and heads of the models while looking if their eyes are put in the correct locations. Since the eyes already point at the right direction, all you have to do is adjust the heads and neck.

A drawback is when you have to re-position the model because that often means re-positioning the ball too. This is something important when you create an animation because you would then have to move the ball to the locations that your model is supposed to look at. But it does make your animated models look more natural during animations. It allows them to quickly move their eyes and even though it’s a very minor detail in animations, it’s still a very simple trick to make their looks more natural. Because the most important part behind this trick is that the eyes are both pointed at exactly the same spot. 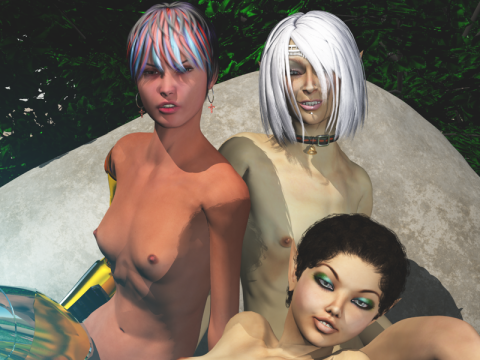 And well, as you can see, the eyes aren’t the first things that you’ll notice. Most will notice the nudity in the image, which just happens to be very casual and peaceful. Others will notice that one model, Aisha, happens to be a cyborg with nice, shining body parts. And people will notice the background, the trees, and probably several flaws too. But when you look at their eyes, they’re all looking at the same point, since they’re all pointing at a ball that’s behind the camera. This makes them look straight at the camera.