I want a new background for my desktop system. But it’s a dual-monitor system with two monitors with 1920×1200 resolutions. This means that I have to make a very wide image. So I decided to make a wide landscape image. But I don’t want a bunch of trees, some mountains and water, but also some models inside the image, doing something. So I’ve decided to make it a hunting scene. On one side, Raevin with a dangerous gun who is hunting a Brontotherium on the other side. So I first need to create and pose them in Poser. And to make it easy, I just put them both in a single model. I can split them again once it’s imported in Vue. So, here are the models: 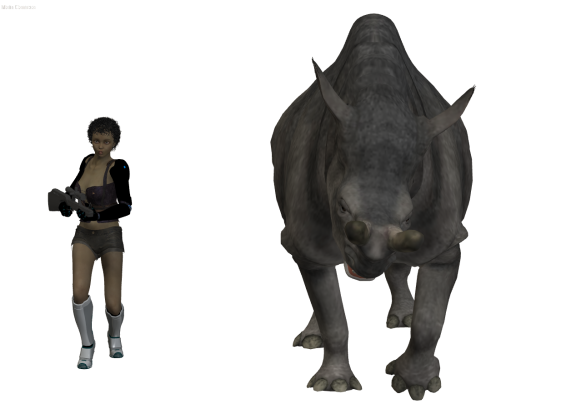 Of course, I will make them look at one another in Vue. As I said, I will split it in Vue. Just needed to create a proper pose first.

The next step is starting Vue, set the image to 4800×1500 pixels which is the proper scale for my two monitors. I will have to re-size it later on to 3840×1200 to make it fit perfectly, but the larger resolution will also allow me to cut out part of the image as separate images. But size won’t be enough. I need to pick a proper atmosphere, the flow of the landscape, the trees and grass I want and of course I want to add water since that big monster would look nice with his body partially reflected. It also means adding some small splashes and ripples.

So, the atmosphere first. It should be sunny and a bit cloudy, but no real visible clouds. A nice sunset would look great. So I start with this:

Next, I need to decide where I want the models and have decided to place Raevin on the left, so the prey is on the right. The sunlight from behind will make his shape a bit darker, thus more menacing. The same will be true for Raevin, but I will add a second light on Raevin so she becomes more clear in the image.

But before adding the models, I need to decide on the landscape. I want a few mountains in the background. I also want the animal standing in a lake, so I need water on the right side. But Raevin needs to be on dry land, preferably grassy. So, let’s add some terrain, grass and trees for in the distance.

It’s still far from perfect but it has a lot of potential  But you will also notice that I have water on the complete foreground, but I want to keep Raevin on dry ground. That makes it a bit complex, but it’s still easily solved. Also, I want to have the animal on top of some rock too, even though that rock would be submerged. It just adds more realism. So, I need to import both now, split them and make some adjustments while placing both on flat rocks. So, let’s first show Raevin in this environment.

Well, I don’t really want Raevin to hunt this animal. She’s cautious but she has a different target. A lot of improvements are still needed, though. For example, I want some bushes in the image too. But first, that animal… And I have to remember to put a rock beneath his feed and to add splashes because he’s walking through water.

This is promising to look very nice already. However, trees! I am going to add a third rock, place it behind Raevin and I will add trees to it, so she’s slightly hidden. No good hunter would be on open terrain where any possible prey or dangerous animal could see them…

However, I’ve noticed that the atmosphere seems to degrading with every new preview I render. It seems to be getting brighter and brighter. So I just load the atmosphere again before my next preview. And yes, this could be a bug in Vue, or maybe a problem with my graphics card. I will have to look into that one day. However, for now reloading the atmosphere works just fine, as shown in this preview:

The next step is fine-tuning the complete image. Raevin needs to be a bit more shiny, and I don’t like the way her gun looks. So I need to fix her textures, or materials. But the problem is that this image is becoming a bit slow to use, so I will use a trick to speed things up. First, I will save this scene so it’s safe. Then it’s time for a new preview. (I will also add a second light just to highlight Raevin.)

And now it’s starting to look better already. The shiny cybernetic limbs of Raevin are a bit shiny in this preview, but I don’t mind. It adds an extra dimension to the image. It’s time to render this image at its full resolution and highest quality. Considering the amount of objects and reflections in this image, I guess it will take a few hours to finish. First I need to save it and then I’ll start rendering around noon. It will probably take most of the night to finish.

And indeed, the next morning I can see the result. Raevin is really having shining cybernetic limbs, which look very interesting. Not a good thing for a hunter, though. Unfortunately, she seems to be floating a bit above the grass so I might have to adjust that. Maybe I should also change the reflectiveness of her cybernetics. The extra rock with the trees is missing some grass, so I might want to add that too. And the mountains in the background you can see lots and lots of houses. It’s really a lot. It turns the setting away from prehistoric times, which is what I like about it. The brontotherium looks great, though. See for yourself!

After considering the above image, I decided that a few details had to be changed. First of all, the background just didn’t look natural enough. The sun is shining very pretty but there are too many houses. Another problem is the shininess of the cybernetic arms and legs, that are too distracting. And there’s a bald spot on the ground where grass is supposed to be.

Rendering a final image is very time-consuming and I knew it would take about a day for the render to be complete. But since I wasn’t happy with the above image, I did render it again with some different details. The scene, lighting and models are still the same, except for the textures of the land and cybernetic limbs. This should be a much better result:

I’m still not very happy with the final result. Raevin needs to be even lower and she should be aware of the beast that’s about to charge at her. So I turned her around a bit. I also changed some of the bushes in the foreground and added additional plants on the right so the “cameraman” would be hiding behind these.

This minor adjustment resulted in the following image, which is supposed to be the last version: