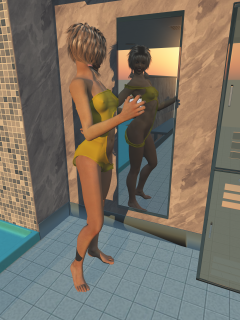 For those who are still hiding in some cave, there’s something going on called “The Fappening“. It’s a celebrity scandal that involve ‘selfies‘ taken by some famous people, most of them female and in various stages between clothed and fully nude. People claim that these celebrities should not have taken nude selfies to begin with but I strongly disagree with that opinion. People should just have respect for the privacy of others and this includes the privacy of celebrities.

Unfortunately, we live in a society where the price of a used tampon can be hundreds of dollars worth, if used by someone very famous, like Miley Cyrus or Jennifer Anniston. Preferably with a certificate explaining how it was retrieved and when it was used. Just no respect for their privacy, since people can earn lots of money with it. And that’s also true with these celebrity hacks.

Now, telling celebrities to stop taking nudies (nude selfies) is like telling people to not use their right of free speech. It would violate their own freedom of expression. Why would the girl next-door be allowed to take nudies while Victoria Justice should not do so? Well, the girl next-door is not as interesting as a target than someone famous. Besides, thousands of girls (and boys) have ended up as victims of the same crime because they shared the nudie with their lover, and that lover would then publish the nudie once the relation ends. (Something called revenge porn.) But those pictures will maybe draw attention from 10 to 20 other viewers while a nudie of Ariana Grande would draw the attention of thousands, maybe even millions, of people.

Problem with the Fappening is that no one seems to know how the hacker(s) gained access to these selfies, although it is assumed that iCloud from Apple isn’t secure enough. Most celebrities seem to favour Apple products over Android products and all investigations seem to focus on the iCloud. Since the iPhone camera can synchronize any picture it takes with the cloud, it also explains how those photo’s ended up on the Internet in the first place. Thus, if an iCloud account is hacked, those photo’s can start roaming all over the Internet.

One cause of this leak is the insecurity of the iCloud. It seems as if the photos are stored without any form of encryption on the iCloud servers. I’m not 100% sure about that, but Apple has a good reason to not use encryption: decryption takes time and thus slows down the system. But I don’t know why the phone itself cannot do the encryption or decryption of those pictures.

Basically, the iCloud account would contain a private key and every device that is used to connect to this account will receive a private key, after the user requests for it. When this happens, an email should also be sent to the user account to warn her (or him) that a new public key has been generated. Thus, if a hacker gains access to the account, he will need the public key, which will warn the user.

This public key would then be used when the user is uploading or downloading photos. Thus, the encryption happens in the phone, not in the cloud. So if anyone has access to the cloud data, they still won’t be able to see the pictures. This will generate much more privacy for the user. Besides, the encryption could also happen within iTunes so the user can synchronize with her computer. And all data the user has should be encrypted before the iCloud receives it.

That would be an important security upgrade by Apple, but users should also take some steps to secure themselves. Perez Hilton has an expert naming a few options but I don’t fully agree with those. To start with, he advises that every celebrity start using a new email address. That’s just wrong, because they can’t throw away the old one.

A better option for celebrities is to register their own domain name. Most of them already have one anyways. Use this domain to generate a bunch of email aliases and use each alias for any specific contact or account that you have. For example, your address to register your iPhone would be apple.phone@example.com while your registration for Amazon would be amazon.com@example.com. Or, if you want to keep up some bookkeeping, just use random codes for every contact. For example, bb001@example.com for Apple and bb002@example.com for Amazon. (In which case you could apply filters that will label incoming emails based on those aliases.)

Maintaining your email aliases this way is quite easy with e.g. the services of Google. There are plenty of alternatives too, but I just like Google so I use them as example. All you need to do is to create one user account and connect it to your domain. If you want to give your lover, your mom or your children with their own accounts then just add a few more user accounts. And if you have some expert handling your ICT requirements, then let the expert have his own user account too. Your own account should be set up as a catch-all address and you could set it up to filter all incoming emails based on the alias that receives it. You will have to add each address in the settings of your email application too, so you can respond with that alias too, instead of your regular mail address.

Another advice is to strengthen your security questions. Please don’t do that. Security questions are just a crappy way to make people think they’re secure while it just opens an extra attack vector to your account. It’s easier to just answer these questions with about 20 random letters and quickly forget about them. Just make sure you don’t forget your password.

The third advise is similar to my advice of using a whole domain. The difference is that my option is still a single account and all your mail will be received by that single account. Thus, you can create a lot of aliases and still support them with ease. Creating multiple email accounts will become troublesome once you have over 20 of those accounts. Basically, it means that you have to check 20 accounts every day instead of just one…

And the last advice sucks if you’re a celebrity, but I have to agree with it. Still, if you want to be famous, you need people to talk about you so some private information needs to leak out. Or you should get some reputation as bad Diva or whatever, walking on stage in a dress made of meat, having your nipple pierced and filmed to show on YouTube or start dating a homeless person with a criminal record just to draw attention. (Sitting naked on a wrecking ball seems to help too…)

But other information, like the name of your dog, the names of your family members and even where you’re taking your date out for dinner are things that are better kept private. You can still have a big influence on the Internet without exposing much of your private information. Your fans will continue to follow you no matter how crazy you act online.

Do keep in mind that you need to uphold a large fan base if you want to continue to profit from your fame. Having these nudies exposed to the public is horrific, but it is also an opportunity to get more fame. For example, Paris Hilton made a sex video of herself and her lover that got exposed to the Internet. Before that happened, barely anyone knew her. But the attention of this scandal did increase her popularity and provided her a lot of new opportunities. Some of the actresses who have become victims are already trying to spin the event into new opportunities for the future. They are trying to still get something positive about all this negative attention.

Besides, beneath our clothes, we’re all naked. We all are sexual beings who often do silly things that are better left to our own private information. You, the victimized celebrities have done nothing wrong. The ones who took those pictures from your private accounts are the real criminals. They are the ones to blame, they are the ones who need to be punished for the whole thing…